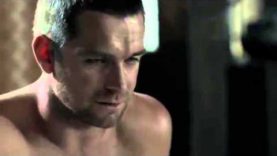 Banshee is an upcoming drama television series created by Jonathan Tropper and David Schickler, who serve as executive producers along with Alan Ball, Greg Yaitanes and Peter Macdissi[2] The series is set in a small town in Pennsylvania Amish country and features an enigmatic ex-con/martial arts expert posing as a murdered sheriff who imposes his own brand of justice while also cooking up plans that serve his own interests. It will air on HBO-owned Cinemax and is produced by Your Face Goes Here Entertainment. Banshee is part of Cinemax’s attempt to expand its original programming content, and it will join Strike Back (co-produced with BSkyB), a television version of The Transporter film series, and Steve Kronish’s Sandbox. Banshee is scheduled to premiere on January 11, 2013.