NERO – Me and You 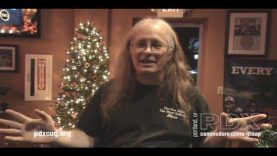 David Lamkins, former Atari 2600 video game developer, gives his story on what it was like back in the early days of video game development. Known as part of the “Gang of Five”, he and four of his colleagues “defected” to work for Activision after working at Parker Brothers.

With his involvement in Frogger, Spider-Man and other Atari 2600 video games and hardware, he shares his story with the Portland Commodore Users Group (PDXCUG.org) at the Dec. 9, 2010 meeting.

Update: Here are some factual clarifications from what he says in the discussion:
1) ~25:00 during discussion of how the big game makers provided incentives for their programmers: _Parker Brothers_ initially paid a straight salary (in contrast to Activision and Atari).

3) Flickering sprites on the Atari 2600 is due to multiplexing, not the HREMOVE technique.

4) Rex’s golf game developed during our time at Activision was on the Commodore 64, not the Atari 2600.