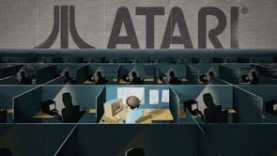 “Gameplay” is a feature documentary film on the history of videogames. Almost 5 years in the making, the film spans the time from the technologies origins, to the birth of the arcade games, from “Pong” to “Pac Man” and “Super Mario” to “Lara Croft”, “Doom”, “Grand Theft Auto” and beyond and everything in between as it chronicles the remarkable story of the fastest evolving new media of all time.

The documentary features interviews mixed with lots of animations and original graphics. I was in Charge of creating several minutes of animated material, which combined vintage graphics and 2D/3D animation. The visual style was developed by Camilo Huinca. I animated the vast majority of the sequences, illustrated additional motionboards, and developed some 3D designs/animations in a related style. The project was immensely fun, as I learned to animate characters during the process. Sebastián Pagueguy directed this project.

“Last Train to London” by Electric Light Orchestra, only used for this website and with no commercial purposes.