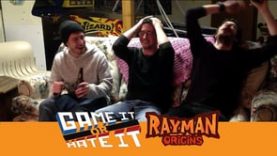 This is an uncensored web show that one of my friends is working on involving video game reviews and gaming culture. He asked if I wanted to produce an episode for them, and this is the final result. This episode covers “Rayman Origins,” the latest release release in the Rayman video game series. It’s being played here on a Playstation 3, but is available to download for Xbox 360 on Xbox Live as well.

All the footage came to be about an hour long originally. This editing for this project mostly revolved around the dialogue; stringing different sentences together through cutaways and switching shots at the moments where I spliced the dialogue. I also added some graphic animations along with 8-bit audio sound bytes to spice things up.

Equipment used includes a combination of an HD PVR to record the video game stream, an iPhone 4 to record dialogue, an iPhone 4S for the wide angle set shot and a Panasonic HDC-SDT750 for all other shots.

If you enjoy this episode, stay tuned for possibly more in the near future. Also check out Game It or Hate It’s own Youtube channel for more game reviews.