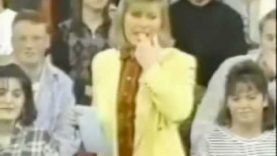 On March 6, 1995, Jenny Jones taped an episode called “Same Sex Secret Crushes” on which Scott Amedure, a gay man, confessed to his best friend Jonathan Schmitz, that he had a crush on him. Schmitz’s response was mostly humorous as he laughed about that revelation in front of the audience. However, three days after the taping, Schmitz, allegedly upset over that incident, killed Amedure. After the murder made headlines, the producers decided not to air the show. However, the episode did air on Court TV when the network was covering the trial. Clips of the episode were also featured in the HBO documentary, Talked to Death.

Schmitz’s history of mental illness and alcohol/drug abuse came to light during the trial in which Schmitz was later convicted of second degree murder. He is currently serving a 25-50 year prison term.

Jones and the producers were later sued by Amedure’s family for neglecting to find out Schmitz’s history of mental illness and substance abuse. Jones testified under oath that the producers told Schmitz that his admirer could be a man, but Schmitz thought that the admirer was a woman. Jones also admitted that the show did not want Schmitz to know the outcome of his secret crush. Amedure’s family won the ruling and the show was ordered to pay $25 million, but that decision was later overturned by the Michigan appellate court because the producers were not responsible for what happened to the guests after their appearance on the show.