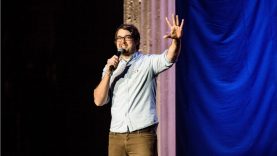 It has been almost 20 years since a new episode of ‘Mystery Science Theater 3000’ has come out with an episode. The new episodes of the show feature Jonah Ray, Felicia Day, and Patton Oswald. The show’s basic concept is that they are all trapped in space and have to watch horrible movies. The new episodes of the show are premiering on Netflix, and fans were excited to see that in one of the episodes they were forced to watch ‘Stranger Things.’ Fans of both shows should definitely check it out.