Wtf is this place? 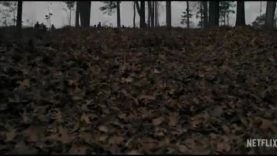 Netflix series “Stranger Things” is one of 2016’s biggest success stories. The series quickly gained massive global interest and fast became one of Netflix most popular series. The second season of the show is confirmed to premiere Halloween 2017. Slowly, small bits of information are starting to come out about season 2. NME magazine is reporting that Netflix Chief Content Officer, Ted Sarandos said that he has seen the season 2 premiere, and he couldn’t be happier with the episode he saw.