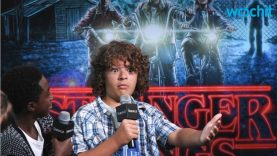 During Sunday night’s Super Bowl a teaser for ‘Stranger Things’ season 2 aired. In the trailer it was revealed that the “crew of misfits from Hawkins, Indiana” will be back on Netflix on Halloween. The show’s creators appeared on Entertainment Tonight last week and spoke about their excitement to have Paul Resier and Sean Astin joining th cast. Season one of the hit Netflix show aired in July and the buzz around it is still going strong.