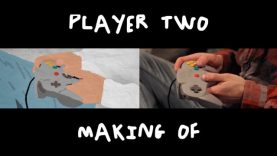 “Player Two” is a short animation that explores the relationship that develops between two brothers of differing age growing up, and how video games foster that bond.