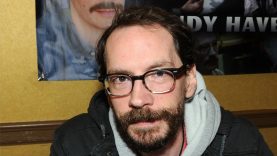 On Friday it was announced that actor Randy Havens will appear in ‘Godzilla: King of Monsters’, making him the second ‘Stranger Things’ castmember to join the film. Havens joins the Netflix show’s breakout star, Millie Bobby Brown, for the sequel, which will be directed by Krampus director Michael Dougherty. Even though Havens has made a number of TV appearances throughout his career, he’s likely most well-known for his performance as science teacher Mr. Clarke in ‘Stranger Things’.