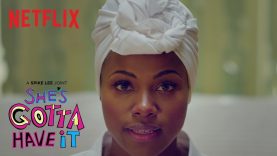 Who is Nola Darling? Return to the story and character of the very first Spike Lee joint, now a 10 episode series on Netflix, available now.

Thirty years ago, Spike Lee burst onto the independent filmmaking scene with his groundbreaking look at one free-spirited artist making it happen for herself in BROOKLYN, New York. Now, Miss Nola Darling returns in a timely, topical update of the visionary writer-director’s She’s Gotta Have It.

The series stars breakout actress DeWanda Wise as Nola Darling, an uncompromising woman in her late twenties struggling to define herself and divide her time among her Friends, her Job and her Three Lovers: The Cultured Model, Greer Childs, The Protective Investment Banker, Jamie Overstreet and Da Original B-Boy Sneakerhead, Mars Blackmon. Nola is not who you want her to be. Nola is now—she is outspoken, complicated, progressive, unapologetic, passionate, sexual. Nola is the modern black woman.

Nola’s story is set entirely in Fort Greene, the vibrant BROOKLYN enclave that’s home to a thriving artists’ colony but also evolving and changing in the modern era as gentrification remakes the neighborhood. Fort Greene isn’t just a backdrop for She’s Gotta Have It—the community functions as a key supporting character unto itself.

About Netflix:
Netflix is the world’s leading Internet television network with over 117 million members in over 190 countries enjoying more than 125 million hours of TV shows and movies per day, including original series, documentaries and feature films. Members can watch as much as they want, anytime, anywhere, on nearly any Internet-connected screen. Members can play, pause and resume watching, all without commercials or commitments.