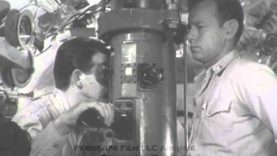 One of the classic TV shows of the 1950s and much beloved by an entire generation of boys who grew up in that decade, SILENT SERVICE ran for 78 episodes between 1957–1958. “The SS Tinosa Story” aired in 1957 and starred Murray Hamilton, William Phipps, Brett Halseyand Britt Lomond. The plot unfolds with the USS Tinosa trying to penetrate the sea of Japan using “Hell’s Bells” type sonar to cross the guarding mine fields. (In WWII, Tinosa completed twelve war patrols in the Pacific and was credited with sinking 16 enemy ships, totaling 64,655 tons.)

Created by California National Productions, this syndicated anthology television series was based on actual events in the submarine service of the U.S. Navy. The show was hosted by Rear Admiral Thomas M. Dykers, who began each episode with the refrain: “Tonight, we bring you another thrilling episode of Silent Service stories, of warfare under the sea.”

This was a great show that aired when a lot of military-related series were on TV: “Flight”, “West Point”, “Annapolis Story” and “Navy Log” to name a few. Unfortunately it never went into re-runs so it’s very rarely seen — something we hope to address via Youtube.

This film is part of the Periscope Film LLC archive, one of the largest historic military, transportation, and aviation stock footage collections in the USA. Entirely film backed, this material is available for licensing in 24p HD. For more information visit http://www.PeriscopeFilm.com