Lizzie and George – Rampage // Back To Bits

Back to Bits – Boy in Blue

Incredible 360 video compilation at aquarium, amazing a must see wow caught on camera 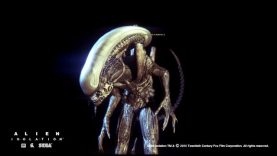 In-game animation of the Alien’s locomotion. A large part of the Alien’s gameplay revolved around him being able to go anywhere at any speed. A three dimensional blended solution was developed to which I provided assets for and iterated upon to achieve the game requirements.

The goal here was not only to make sure we satisfied gameplay but that the Alien felt like a living breathing creature, capable of anything through it’s movement.

All assets provided for this technical solution were keyframed by myself. Blending forward motion along Z of varied speed, parametric turns at those speeds and varied speeds along X. The solution was used for both when the Alien is bipedal and when he is crawling in the vent. The tail is an in-game physics solution.

This video shows examples of the range speeds the Alien was capable of, whether that be forward motion alone, forward and turning, sideways, backwards or a mixture of all blended together. All of these full body animations are also combined with multiple animation layers for face detail, fingers, upper body and head additives.

Credit goes to: Tobias Kleanthous (Animation Programmer), Chris Le Roux (Senior Animator) & Helen Cranston (Animator) who all played a massive part in the development of this work and tech alongside myself.

Incredible 360 video compilation at aquarium, amazing a must see wow caught on camera