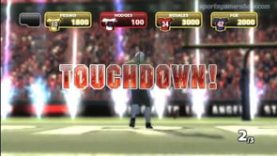 Natural Motion is hoping the huge success of the iOS Backbreaker games will continue with the release of Backbreaker Vengeance for the Xbox 360.

Backbreaker Vengeance is nothing like its 11-on-11 football predecessor, Backbreaker for the Xbox 360 and PS3. Instead, the game is a downloadable title for Xbox Live Arcade and is similar to the Backbreaker titles on the iPhone, iPod Touch and iPad.

With Natural Motion’s excellent Euphoria physics engine and upgraded graphics for the Xbox 360, some may think Backbreaker Vengeance is a game any football gamer should add to their collection, but there are some issues that prevent it from being a must-buy game.