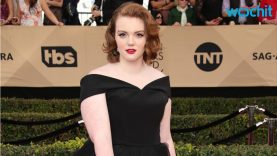 Stranger Things became one of the most talked-about shows in television last year, and its unique characters gained a ton of buzz. Barb, the red-headed best friend of Nancy Wheeler, became beloved by fans almost instantly. If you’re a big fan of Barb, fear not. Actress Shannon Purser is returning to TV very soon. She’ll debut on Riverdale this week. The CW has released the first image of Purser’s character on the new show, and has stated she’s set to appear in Thursday’s episode.