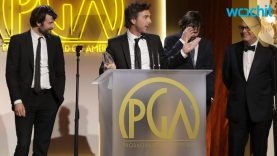 ‘Stranger Things’ won the Norman Felton Award for Outstanding Producer of Episodic Television, Drama at the 28th Annual Producers Guild Award Ceremony. The producers of ‘Stranger Things,’ Matt Duffer, Ross Duffer, Shawn Levy, Dan Cohen, and Iain Patterson, happy received the award. ‘Stranger Things’ is a Netflix sci-fi show that takes place in the 1980s and follows the story of a small Indiana town. The second season of the show will be released this year, and fan are very excited.