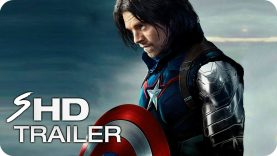 DC’S TEEN TITANS on The CW ▼

Epic trailer for the possible DC Teen Titans TV series! Would you guys love to see the Titans fight alongside The Flash & Arrow in The CW universe?
Hope you guys like! Please do share!

Check Out These Other Fan Made Trailers!

✖ Hugh Jackman THE LAST OF US Movie Trailer: https://www.youtube.com/watch?v=giW-5nlJ-UE

✖ Huge thanks to Megan Coffey for her amazing Cosplay photography in the thumbnail!
►https://www.facebook.com/megancoffeystarbuxx/

✖ Thanks to ismahawk for some awesome footage from their Nightwing series!
►https://www.youtube.com/watch?v=o297A1wmys0

✖ Music – Nirvana ‘Smells Like Teen Spirit’ by Think Up Anger

Titans is an upcoming American television series that will air on an unnamed DC Comics digital service, based on the DC Comics team of the same name. Akiva Goldsman, Geoff Johns and Greg Berlanti created the series, which sees Brenton Thwaites star as Dick Grayson, the leader of the Titans, alongside Anna Diop and Teagan Croft as Starfire and Raven, respectively.

A live-action series based on the Teen Titans entered development in September 2014 for the cable channel TNT, with Goldsman and Marc Haimes writing the pilot. The pilot had been ordered by December 2014, but never came to fruition, with TNT announcing in January 2016 it would no longer be moving forward with the project. In April 2017, it was announced that the series was being redeveloped for DC Comics’ new direct-to-consumer digital service, with Goldsman, Johns and Berlanti attached. Brenton Thwaites was cast as Dick Grayson in September 2017.

The live-action Teen Titans are finally coming to television (sorta) by way of a new digital streaming service from DC. As anyone who follows the Titans knows, though, they’ve got a pretty fluid roster of heroes that changes constantly. Today’s news has us wondering: which Titans are we going to see? Here’s what we know so far: the series is being executive produced by DC CW producers Greg Berlanti and Sarah Schechter—a fact that may very well affect the casting of the show as it moves into production. It’s unclear if and how the new Titans series will interconnect with the DC elements of the CW, but if it does, it would mean that a number of younger heroes like The Flash’s Kid Flash and Arrow’s Speedy could make plausible moves to the new team.

On the other hand, though, if Titans were its entirely own thing like Gotham, the show would be freer to have its own, new version of young heroes that have already appeared on-screen—which in turn would give it more freedom to tell its own stories. There’s a real benefit in giving it its own continuity that dosn’t beholden to the CW properties.

Deadline announced today that actress Teagan Croft will be embodying the emotionally challenged young hero in her first live action appearance. Croft’s Raven is described as the daughter of a demon, and is a powerful empath who must keep her emotions in check or risk unleashing her demonic side.

Raven is the first casting announcement made for the eagerly anticipated Titans television series. Written by Akiva Goldsman (Star Trek: Discovery), DC Entertainment President and Chief Creative Officer Geoff Johns (The Flash, Arrow) and Greg Berlanti (Arrow, DC’s Legends Of Tomorrow, The Flash, Supergirl), Titans will follow a group of young soon-to-be superheroes recruited from every corner of the DC Universe. In the action-adventure series, Dick Grayson emerges from the shadows to become the leader of a fearless band of new heroes that includes Starfire, Raven and others.

**This video was made purely for fun.
Copyright Disclaimer Under Section 107 of the Copyright Act 1976, allowance is made for “fair use” for purposes such as criticism, comment, news reporting, teaching, scholarship, and research. Fair use is a use permitted by copyright statute that might otherwise be infringing. Non-profit, educational or personal use tips the balance in favor of fair use. No copyright infringement intended.