The Official List of What You Have to Watch

The 5 Best Libertarian TV Shows Ever

How Do TV Ratings Work?

The 5 Most Anti-Libertarian TV Shows Ever!

The 5 Best Libertarian TV Shows Ever 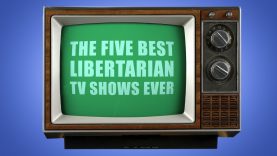 After a long day of bitcoin mining, even libertarians like to kick back with the intoxicant of their choice and turn on the TV.

Here are five television shows all libertarians should watch.

The Prisoner (1967-1968). The Prisoner follows a British secret agent who wants to walk away from it all but ends up a captive of the very government he once served. Late ‘60s psychedelia. Paranoia. Long philosophical disquistions about the meaning of life. Series finale set to the Beatles “All You Need is Love.” It’s all here and the charming insistence that “I am not a number, I am a free man.”

House of Cards (2013-present). What more do you have to say about a political soap opera in which a disgruntled congressman lies, cheats, and murders his way to the Oval Office in just two seasons? This Netflix original series is a bracing and long-overdue response to decades of treacly depictions of politicians, journalists, activists, and crony capitalists as motivated only by principle and idealism.

Penn & Teller: Bullshit! (2003-2010). Hosted by the most memorable duo since Cain and Abel, Bullshit! trained a skeptical eye on everything from bottled water and feng shui to the war on drugs and the death penalty. Never slow to fly their libertarian freak flag, Penn and Teller didn’t just debunk popular wisdom, they showed us all how to think more critically, especially about the things we cherish most dearly.

The Wire (2002-2008). Widely considered one of the greatest TV shows of all time, this Baltimore-based drama has been called a visual novel that explores and analyzes class, race, and politics from multiple viewpoints and perspectives. Different seasons keyed in on different institutions—schools, police, the media—and the ways in power was exercised and abused, often in the name of helping the underprivileged.

South Park (1997-present). Now in its 18th foul-mouthed season, South Park has lampooned and satirized everything from pompous Hollywood celebrities to Al Gore’s super-cereal campaign against global warming to murderous Islamic terrorists. Along the way, Trey Parker and Matt Stone have taught us all real media literacy by showing us how to identify and spot phony philosophizing, moral panics, and self-interested crusaders a mile way.

Written and narrated by Nick Gillespie. Shot and edited by Meredith Bragg.

For full links, downloadable versions, and more videos and articles, go to http://reason.com/reasontv/2014/10/01/the-5-best-libertarian-tv-shows-ever

How Do TV Ratings Work?