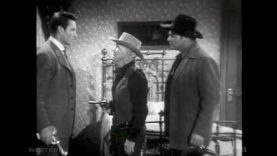 The Traveling Salesman is an episode of an almost forgotten anthology television series titled Stage 7. This episode is from 1955. With George Montgomery, Alan Hale Jr., Gloria Talbott and Karen Steele. George Montgomery starred in some wonderful classic western movies including Man from God’s Country , The Toughest Gun in Tombstone , Masterson of Kansas and Robbers’ Roost and also starred in the classic 1958 – 1959 western TV series Cimarron City as Mayor Matt Rockford. This is a great half hour television episode with a bit of drama, romance and comedy. In this episode Dan Kelly is a whiskey salesman and he winds up in a bit of hot water trouble. This is episode 15 of The Forsaken Westerns, an original TV series produced by Westerns On The Web Productions. The Forsaken Westerns series contains episodes of TV shows that were never broadcast or have not been broadcast in as many as 65 years. Almost lost forever, these rare television film treasures are now being released and uploaded. The series launched March 1 of 2017 for free viewing from the http://www.westernsontheweb.com archive collection. This series is hosted by Bob Terry. Watch full length western movies and TV shows full episodes on the Westerns On The Web channel and make sure to subscribe.