I Can’t Believe These Are All TV Shows 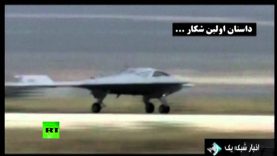 Iran for the first time showcased supposed evidence it has managed to access some of the data stored on a US RQ-170 Sentinel drone it captured back in December 2011. The claims are based on aerial footage aired by an Iranian TV channel – READ MORE http://on.rt.com/c4gie6