HomeWTFWhat Do We Know About "Stranger Things" Season 2?
AUTO NEXT 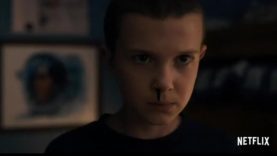 Netflix original series Stranger Things is gearing up for the release of season 2.
Fans are salivating for any news about the series, which releases Halloween 2017. So, what do fans know so far?
The series showrunners and creators Matt and Ross Duffer, have been tight lipped about the second season.
They did reveal the second season will take place a year after the first season ended. We also know that Will has powers from his time in the Upside Down.