Top 10 TV Shows You Shouldn’t Watch with Your Parents

7 Most Epic TV Series Finales of All Time

7 Most Epic TV Series Finales of All Time 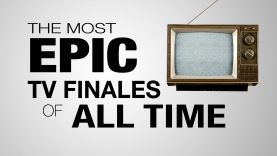 The end of a TV show is the beginning of its legacy. Here are 7 of the most memorable series endings (SPOILERS) in the history of the small screen. Subscribe: http://goo.gl/9AGRm

What did you think was the most epic series ending ever? Did we leave your favorite off the list? Were you disappointed by any of these finales? What movie (and TV!) topics would you like to see us cover in future lists?

Let us know in the comments!

THE LIST:
The Shield
Ended: November 25th, 2008
Show Synopsis: The story of an inner-city Los Angeles police precinct where some of the cops aren’t above breaking the rules or working against their associates to both keep the streets safe and their self-interests intact.

Breaking Bad
Ended: September 29, 2013
Synopsis: To provide for his family’s future after he is diagnosed with lung cancer, a chemistry genius turned high school teacher teams up with an ex-student to cook and sell the world’s purest crystal meth.

The Sopranos
Ended: June 10, 2007
Synopsis: Modern day morality tale about New Jersey mob boss Tony Soprano, as he deals with personal and professional issues in his home and business life.

Six Feet Under
Ended: August 21, 2005
Synopsis: A drama series that takes a darkly comical look at members of a dysfunctional California family that runs an independent funeral home.

Our friends over at IndieWire put together some seriously inspired MOVIE (and TV!) LISTS: http://bit.ly/12x0UpF and CineFix is bringing ’em to life!

Want to know what’s going on with Cinefix in the future?
Follow us Twitter for updates: https://twitter.com/CineFixNetwork

Top 10 TV Shows You Shouldn’t Watch with Your Parents

Find out about the easiest way of money earning.