Bill Nye Discusses the Upside Down World on ‘Stranger Things’

Bill Nye Discusses the Upside Down World on ‘Stranger Things’ 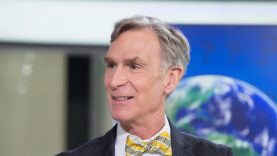 In a new video released this week, Bill Nye the Science Guy discusses the plausibility of the Upside Down world from the Netflix smash hit series ‘Stranger Things’. In his video, Nye talks about the Multiverse Theory – a belief that as the universe expands, energy creates worlds that are similar to ours, but ultimately separate. According to Nye, some real life scientists believe in this theory and the scientific community has frequently debated its plausibility.