How to pitch a TV Show – advice from the pros

10 Huge Mistakes You Have To See In TV Shows

How to pitch a TV Show – advice from the pros 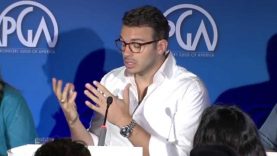 Non-scripted television remains a marketplace in flux, churning with new premises and formats that seem to emerge every week. Our panel of company and network execs help you to stay ahead of that relentless curve, sharing candid insights about their current approaches to program acquisition and development. What sorts of stories get buyers excited? And how can you refine your projects to play to today’s—and more importantly, tomorrow’s—programming trends?

Moderator
Hayma ‘Screech’ Washington
The Amazing Race, Hurricane Hunters
———————————-
The Producers Guild of America protects and promotes the interests of all members of the producing team in film, television and new media.

The PGA has over 6,500 members who work together to protect and improve their careers, the industry and community by facilitating members health benefits, encouraging enforcement of workplace labor laws, the creation of fair and impartial standards for the awarding of producing credits, as well as other education and advocacy efforts.

The Producing Team consists of all those whose interdependency and support of each other are necessary for the creation of motion pictures and television programs.

I had a leads for your business

I had a leads for your business