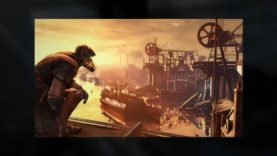 Dishonored is a 2012 stealth action adventure video game developed by Arkane Studios and published by Bethesda Softworks. It was released worldwide in October 2012 for Microsoft Windows, PlayStation 3, and Xbox 360. Set in the fictional, plague-ridden industrial city of Dunwall, Dishonored follows Corvo Attano, the Empress’s legendary bodyguard