HomeGAMINGPlayStation 4 - For The Players Since '95 TVC
AUTO NEXT 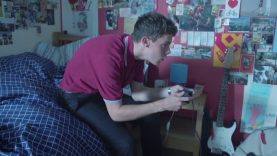 The story of the Sony PlayStation, from 1995 to the present, is told in a clever new film revolving around the changing lives (and bedroom) of the gamer of his generation and his friends.

For the Players Since 1995 is full of clever liittle details to mark the passage of time, from the changing posters on protagonist Daniel’s wall, to the music, the changing fashions, London skyline and, of course, the console he uses.

The production team even got Domino’s to supply pizza boxes from each era. And, as a commenter on YouTube points out, it even switches from a 4:3 screen ratio during the PS1 era to 16:9 when﻿ the PS2 era begins.

Directed by Will Innes Smith and Adam Wells

Produced by Grant Branton for gotgotneed