10 TV Shows From The 90s We Really Miss Today 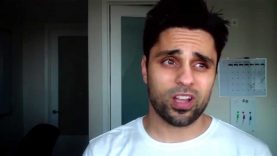 -I have to put the Runaway Thoughts on hold

-I have to put Equals Three casting on hold

-I’m pitching Riley Rewind to networks as a TV series

-I appeared in an episode of Epic Rap Battles of History
http://www.youtube.com/erb

Thanks for your understanding and support, guys. 🙂

10 TV Shows From The 90s We Really Miss Today