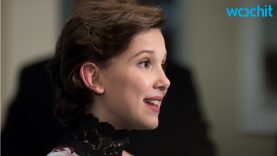 Stranger Things star Millie Bobby Brown has nabbed her first film role … and it’s monstrous. Brown has signed on to star in Godzilla: King of the Monsters, Legendary’s sequel to its 2014 creature feature. Michael Dougherty is directing the project, which he also co-wrote with Zach Shields, his partner on Legendary’s horror movie Krampus. King of Monsters is part of a giant monster cinematic universe that also includes Kong: Skull Island.