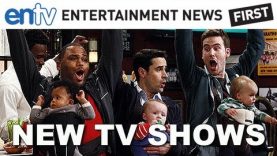 Its up fronts week in New York City, and the networks are making big decisions about which shows to stay on their schedule and which ones are out.

CBS is cleaning house this season – cancelling freshman shows NYC 22, Unforgettable, Rob, and A Gifted Man, as well as long-running hit CSI: Miami. The network is adding four new drama series, Elementary, Vegas, Made in Jersey, and Golden Boy, and two comedies: Partners, and Friend Me.

NBC is adding Jimmy Fallon-produced Guys with Kids, as well as Go On starring Matthew Perry, Animal Practice, The New Normal, Chicago Fire, and Revolution. Mid Season premieres include Save Me, 1600 Penn, Next Caller, Do No Harm, Infamous, and Hannibal, plus The Office is also back for its ninth season.

ABC has renewed Don’t Trust The B—- In Apt. 23 and Scandal will also be back, as well as Grey’s Anatomy. Private Practice and Body of Proof have also been renewed.

FOX has renewed Raising Hope and New Girl. They are also adding Mindy Kaling’s new comedy The Mindy Project, and adult sibling comedy Ben And Kate. The X Factor, Glee and Touch are all returning. Fringe has also been renewed for it’s final season.

For the full list of TV shows coming later this year check out Deadline.com
http://www.deadline.com